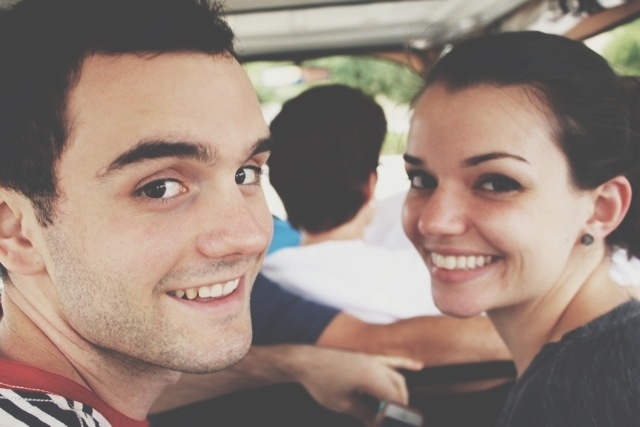 First things first… I love my camera. I’ve got a Canon T1i and even though she’s a bigger girl, I still lug her around for the pictures. When my Mom was kinda like, “you spent that much money on a camera…?” I had to remind her I’m only young and attractive once. When I’m 75 and wrinkled to boot, I’ll be happy I have evidence that I was once a girl, not a raisin.
ANYWAYS – it is my boy’s birthday weekend. He’s going to be twenty two :o His roommates (tha two on the far left), Kent, and his two friends from Gainesville, Dan and Matt (in ze middle) all drank a lot of beer last night. (obv) 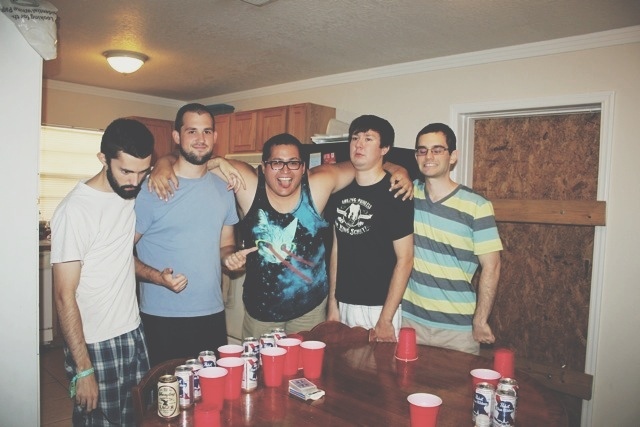 Let’s talk real quick about the plywood elephant in the room. The guy’s back door needed new weather strips put on it, and then the landlord just decided it was time for a new door. Instead of just bringing a new door to switch out with the current one… they put some plywood up in the meantime. I’ll never understand the way men think.
But plywood aside, this picture is so chummy. Weird, but chummy. 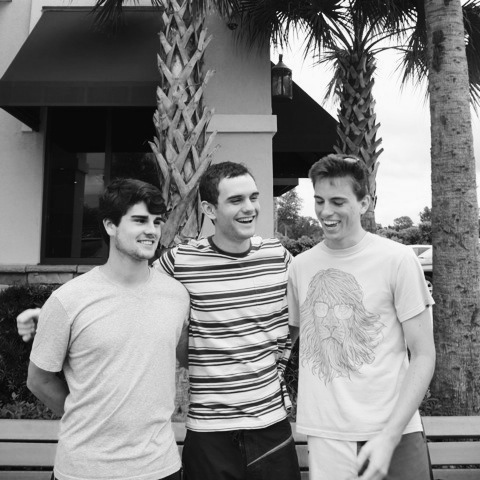 TODAY! We went to the Kinberger’s time share for blosserfest round two. While just about anything would be more fun than being the sober spectator to beer pong, the Blosser’s really are fun to be around. So naturally this morning I was dragging Kent out of bed, feeding him coffee and Cheerios, and begging to go hang out. 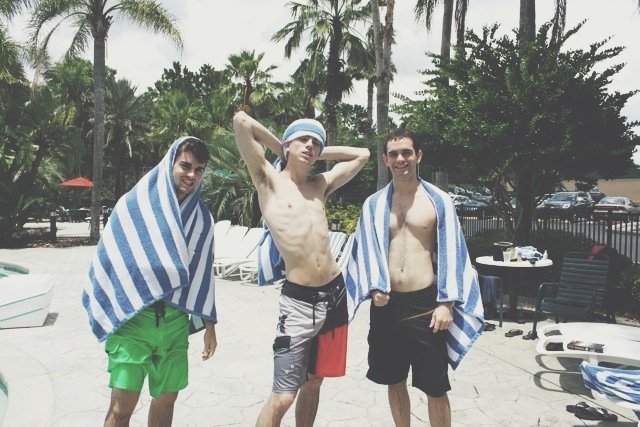 As we all know, the morning after excessive birthday drinking cannot be rushed. We ended up in Kissimmee (side note: I spelled it right on the first try) around noon time. We laid by the pool for a couple of hours, while Kent vehemently turned down margaritas of all kinds (ha). We went back to the room for food, where I was introduced to artichoke pizza by Stanley. Don’t bother wasting your time doubting it… it was SO GOOD. 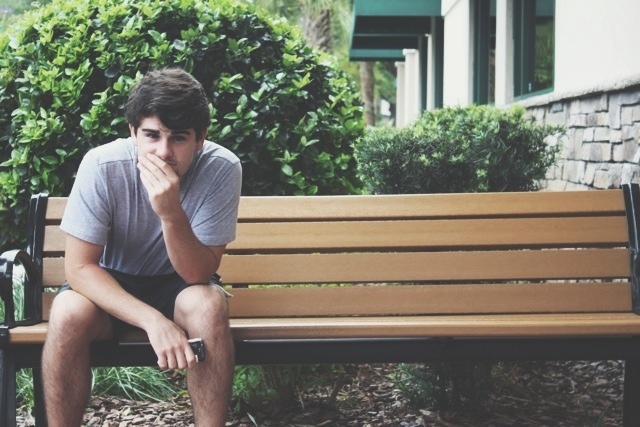 Met up with Rob & Jay at the ale house and munched on an early dinner. Seriously, these Blosser/Kinberger folk can stay. They let me blow them up with pictures as much as I want. They even smile (ahem, Kent). 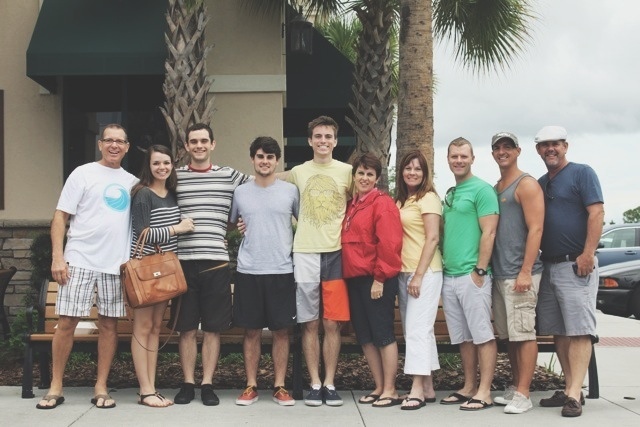 The rainbow coordinated AT&T bar starting with Nanny is perfect. They grabbed a girl from inside the restaurant to come take our picture, and she was so into it. Took this one, then got down on one knee, then moved back to get in the palm trees. 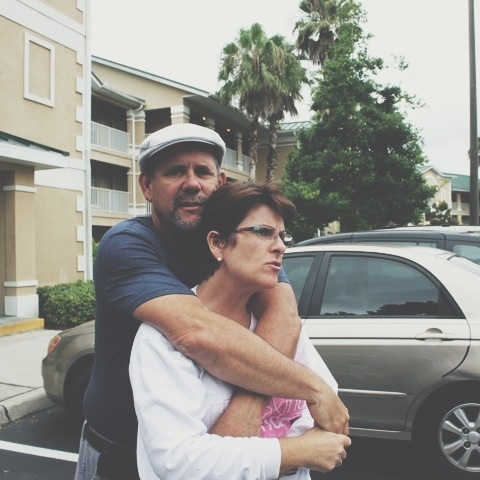 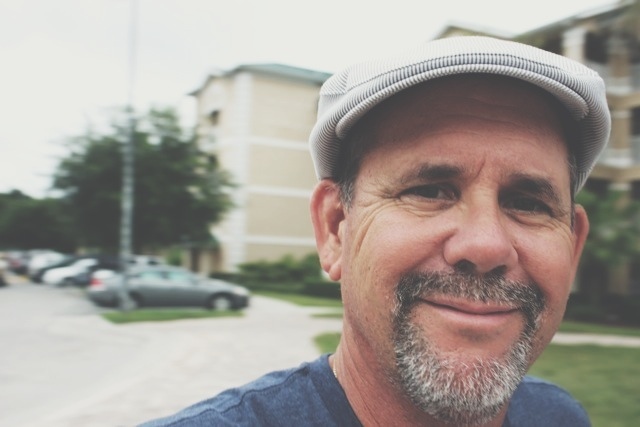 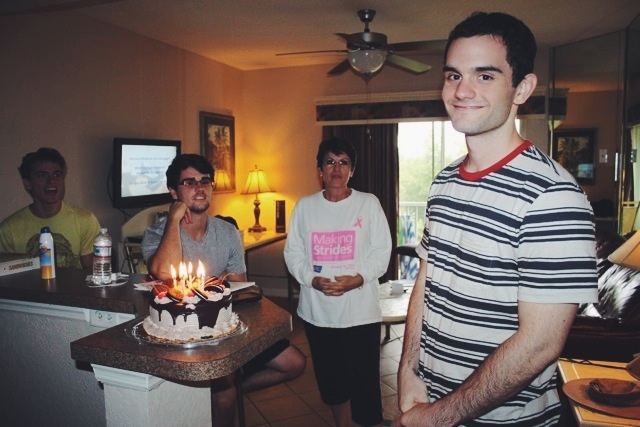 Definitely my favorite picture from today, babes and his (ice cream) birthday cake. He gets so flustered when the attention is on him, watching him fidget through Happy Birthday was cute as hell. And so were the trick candles. We somehow managed to not set off the fire alarm, but those candles were stubborn and smokey as hell.

tired kate over and out
p.s. pictures from blosserfest day one here!